IT was not all doom and gloom for the Perth real estate market in 2019.

The overall market results may have not been inspiring, but many areas saw an increase in sales activity or properties sell in half the time of the Perth average.

According to Reiwa, a Mandurah suburb recorded the biggest growth in sales volume, while properties were being snapped up in just over five weeks in one western suburbs area.

President Damian Collins said while the property market experienced fairly subdued conditions in 2019, it was positive to see there were suburbs that improved over the year.

“Last year, sales activity in Perth decreased 5 per cent, while 57 suburbs bucked this trend to show an increase in activity, with Lakelands demonstrating a 36 per cent increase,” he said.

“Mundaring and Alfred Cove closely followed with a 30 per cent increase in sales activity for the year.

Of these top suburbs, seven of them also saw increases to their median sale price, with Swanbourne showing a 6.3 per cent growth to $1.572 million.

“Increase in sales turnover and a reduction in selling days is often a leading indicator of future price growth in a suburb” said Mr Collins.

“While sales activity in the lower-priced end of the Perth market remains soft, activity in the $600,000-plus price range has strengthened, which has created increased demand among trade up buyers who now make up 53 per cent of buyers.

According to reiwa.com data, it took an average of 84 days to sell a house in Perth during 2019, but in suburbs like Wembley (39 days), Heathridge (41 days) and West Leederville (43 days), sellers were finding buyers for their properties in about half the time. 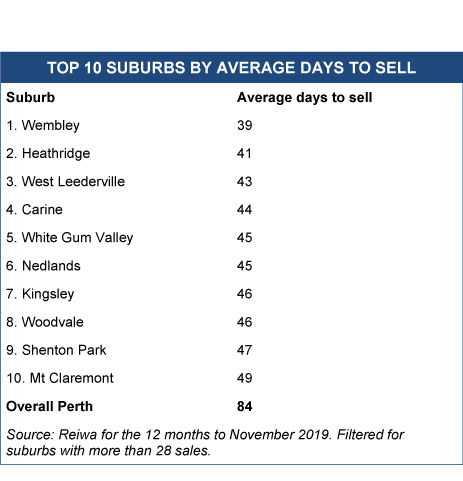 Mr Collins said these were the areas to watch.

“As we head further into 2020, the suburbs to watch are the ones where the number of days to sell a house are well below the Perth average.”

The cheapest suburbs to buy a home